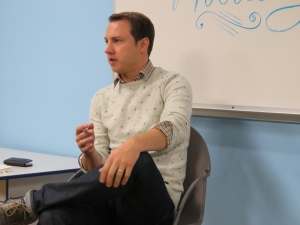 Corey Hutchins came to Colorado Press Women’s May 20 meeting to talk about matters newspapers don’t usually report on. For example: owners who are cutting staff costs and milking the cash out of Colorado newspapers. Moving newsrooms out of the communities they report on. The threat that Facebook now constitutes for the small community papers that have been protected financially.

As a journalist for The Colorado Independent, Colorado correspondent for the Columbia Journalism Review, visiting lecturer at Colorado College and author of a regular email report on Colorado news media, Hutchins has made it his business to find out what’s going on and identify trends. (To get on his mailing list, send him a message at coreyhutchins@gmail.com.)

Hutchins is impressed by the Fort Collins Coloradoan, which has gotten openly involved with legislation — not something journalists commonly do, even if the legislation concerns freedom of the press and bringing Freedom of Information requests into the digital world.

He also lauded the Coloradoan’s work on community engagement. Its approach has included combining brews and news ­— inviting the community to talk face-to-face over beers with a top Coloradoan reporter. If that proves popular in the brew-loving city, Hutchins predicted Gannett, the Coloradoan’s owners, may try selling tickets to the events and taking it to other communities.

A different way of making money is being pursued by another owner of Colorado papers, the hedge fund Alden Global Capital, which owns The Denver Post as well as the papers in Loveland, Longmont and Boulder. In most of those cities, the reporters’ offices are no longer located in the communities their mastheads purport they cover.

The Denver Post’s shining building on Civic Center, a short hike from the Colorado Capitol and Denver City Hall, is being sold while the newsroom is moving to Adams County. Likewise, the Loveland and Longmont newsrooms operate out of the Boulder Daily Camera’s building. “It’s a credibility issue,” says Hutchins. The newspapers’ owner is cutting reporters, which hamstrings news coverage, while milking the cash (a.k.a., selling the buildings) out of the publications. The question Hutchins left unanswered is what happens once the cash cow runs dry.

He noted that conservative billionaire Philip Anschutz was rebuffed in his offer to buy The Denver Post, so he bought the Colorado Springs Gazette and has set about turning a famously conservative-biased editorial product into a creditable one, largely by hiring an editor from The Washington Post. Hutchins opined that Anschutz is painting a portrait of himself as the “elder statesman” of Colorado journalism while still hoping to buy The Post.

With the death of Pueblo Chieftain publisher Bob Rawlings, that rarity of a family-owned newspaper is up for sale. Turning his attention to the Western Slope, Hutchins says the Grand Junction Sentinel’s owner decided not to go through with his threat to sue a state senator who described the paper as “fake news.” The slur did hurt the paper’s bottom line, which provided grounds for a successful suit in the opinion of the publisher (a former litigator), but he balked at costing the taxpayers money to defend their state senator.

Community papers — the weeklies that survive on legal notices and news so local no big city paper cares to cover it — have been protected financially from the rapacious trends in the industry. People prefer to get their news from their local paper, even in Yuma, where citizens complain that the Pioneer Press never publishes interviews with hometown boy Sen. Cory Gardner anymore. Facebook pages where people post their own news about their community — for free — put pressure on local papers’ cozy niche, however.

CORRECTION: Edited May 30 to correct the title of the Grand Junction politician (a state senator, not a county commissioner) and to add Hutchins’ position with The Colorado Independent, which he hopes Press Women will read.