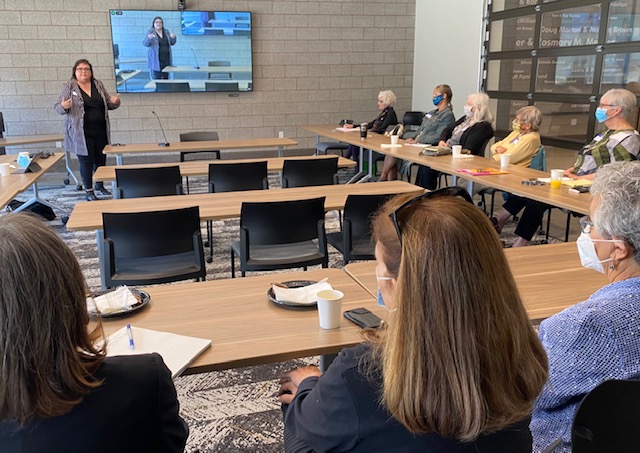 The hybrid celebration of Colorado Press Women’s 80th anniversary held at the Buell Public Media Center on October 2 was a mingling of the historic and contemporary high tech with discussion of a first-of-its-kind funding model for community journalism.

With a combination of CPW’s history by Lee Anne Peck and a tour of the building that is incorporating the up-to-the-minute trends in public media, the celebration underscored CPW’s commitment to media literacy and community news through the years.

Veteran journalist Linda Shapley, publisher of Colorado Community Media, offered a keynote address that told of a successful arrangement to keep local news in local hands when longtime owners seek to retire, important “because we’ve all seen what happens when a news organization is owned by people who are motivated by profit as opposed to the purpose that journalism has.” Shapley leads CCM’s two-dozen Colorado newspapers and websites as the company’s first publisher since its spring sale to The Colorado News Conservancy, a partnership of The Colorado Sun and the National Trust for Local News.  The state’s largest community media outlet, CCM newspapers serve Adams, Arapahoe, Clear Creek, Denver, Douglas, Elbert, Jefferson and Weld counties, reaching more than 300,000 people each week.

Shapley cited a study showing some 1,800 newspapers have closed since 2009, creating giant news deserts and, thereby, a vacuum that allows misinformation to come in. The National Trust, a nonprofit trying to create a system to help local newspapers stay in local hands, reached out to Colorado journalism support organizations to get contacts with foundations and philanthropists and created a partnership with The Colorado Sun, which already is a public benefit corporation. They put together a loan to buy CCM’s network of papers, the first time the National Trust has gotten foundations to back a loan. CCM will stay for-profit while it pays off the loan, Shapley said, and once that is paid off, CCM will be owned by The Colorado Sun and she expects is also will become a public benefit corporation.

“For news to be accessible, it has to be affordable,” Shapley said, explaining that CCM runs news coverage for the 24 papers with 16 reporters and four regional editors. The annual subscription rate is $40, which provides digital access to all the papers as well as one print edition. 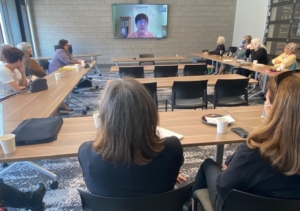 Karen Rowley, president of the National Federation of Press Women, joined the celebration via Zoom from Baton Rouge, Louisiana, saying she was glad to be helping Colorado Press Women celebrate its 80th anniversary. She emphasized the role of community newspapers in covering Hurricane Ida’s impact on smaller communities in Louisiana and noted CPW’s Donna Bryson, a national editor for Reuters, had read Rowley’s NFPW newsletter column and then sent a reporter to the little towns she talked about. (Read Reuters’ resulting story.)

Julia Cardi was introduced by CPW president Sandy Nance as CPW’s new representative on the Colorado Freedom of Information Coalition (CFOIC). Cardi is a criminal justice, public safety and general assignment reporter for The Denver Gazette. She spoke about two open records obstacles she and coworkers are fighting.

Peck, CPW’s historian and an assistant professor at Colorado State University, presented a comprehensive review of CPW’s founding and history.  Beginning in summer 1941 when NFPW’s first president spoke to curious women at the Denver Dry Team Room, the fledgling organization then gathered to organize at the home of Elizabeth Kuskulis. CPW’s membership advocated for moving the national capitol to Colorado, among other surprising positions. Colorado has hosted the national NFPW convention three times. Peck’s Zoom presentation offered enduring photos of Ruth Anna posing with President Bill Clinton, a photo of the first summer getaway in Aspen with Mary Eshbaugh Hayes and photos of NFPW conferences held in Colorado. 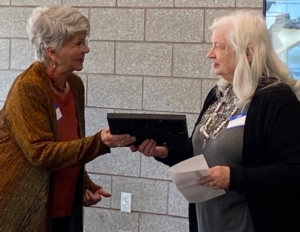 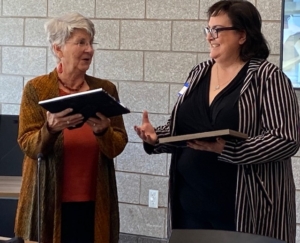 Linda Shapley and Kathleen Spring were awarded certificates for their newspapers’ contributions of charter members to the founding of Colorado Press Women in 1941. The charter members from the four papers in Littleton, Golden, Brighton and Fort Lupton, now all owned by Colorado Community Media, were all publishers, plus one editor, Nance remarked. The charter member from the Lyons Recorder, now owned by Spring, was a columnist.

The Buell Foundation, longtime partner of Rocky Mountain PBS, was the lead sponsor in building the Buell Center with a $6 million investment, and the rest of the $35 million was raised through traditional philanthropic support, property consolidation, land swaps and tax credits, according to the Colorado Real Estate Journal.

Colorado Press Women began its 80th anniversary celebration in the summer of 2021 by honoring three newspapers in Canon City, Alamosa and Trinidad that contributed to the founding of CPW.

To watch the Zoom recording of the meeting, click below: