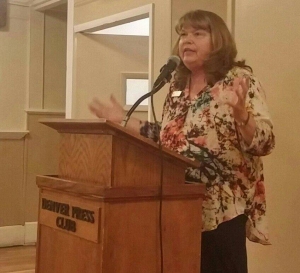 Lynn Bartels fears a legislative attempt to bring Colorado’s Open Records Act into the 21st century has been set up to fail, and that that might lead proponents of change to try their luck at the ballot.

Bartels, a former reporter who is the spokeswoman for the Colorado Secretary of State’s office, talked Tuesday at an event organized by Colorado Press Women. Hours earlier, a state Senate committee had approved a bill that would require state agencies to provide data requested by the press and the public in their original electronic formats, which would make them easier to search and analyze. The bill now heads to the full Senate for debate.

The change, which would make public records not just open but accessible in a meaningful way in this electronic age, is supported by Bartels and her boss, Secretary of State Wayne Williams.

“I just don’t see why people hide things,’’ Bartels said at Tuesday’s event commemorating Sunshine Week, an annual, national moment to consider the importance to our democracy of access to information that belongs to the public.

The bill on electronic records, SB 17-040, was inspired by a 2015 episode involving Colorado State University and its hometown newspaper, the Coloradoan. The newspaper set out to dig deeper after a CSU statistics professor raised concern that female full professors were being paid less than their male counterparts. After CSU refused to give the newspaper its computerized record of salaries, reporters spent weeks creating their own database from documents the university did make public under CORA containing information on nearly 5,000 employees. After the Coloradoan’s stories appeared, CSU increased the pay of dozens of professors, saying it had been determined they weren’t being paid enough. A quarter of CSU’s female full professors and about 11 percent of male professors got raises.

SB 17-040 emerged from lengthy discussions convened by the Secretary of State’s Office aimed at balancing the need for openness with concerns about individuals’ privacy and manipulation of data. Officials who are custodians of records and those who want access to them — including the Coloradoan’s executive editor who represented the state’s newspapers — were involved in the talks. Before the bill passed out of the Appropriations Committee on Tuesday, an amendment was added to have it apply to the judiciary, which has its own transparency rules. The judicial branch and Democrats who control the House oppose such an expansion of CORA.

“I think they put this amendment on it in hopes it will die,” said Bartels, who was a longtime statehouse reporter. “There was a lot of work that went into this. It would be a shame.”

Opponents of the measure risk ending “up with a ballot measure in 2018 that will have things they despise,” Bartels added.

Bartels was a journalist for 35 years, including 16 years at the Rocky Mountain News and six years at The Denver Post. She spoke at the Denver Press Club, which inducted her into its Hall of Fame in 2015.

Story and photo by Donna Bryson