The topic “Restoring Trust in the Media” elicited a lively panel discussion by three university journalism professors, a newspaper editor and a high school journalism teacher, along with members of Colorado Press Women and guests at the University of Denver Feb. 4. 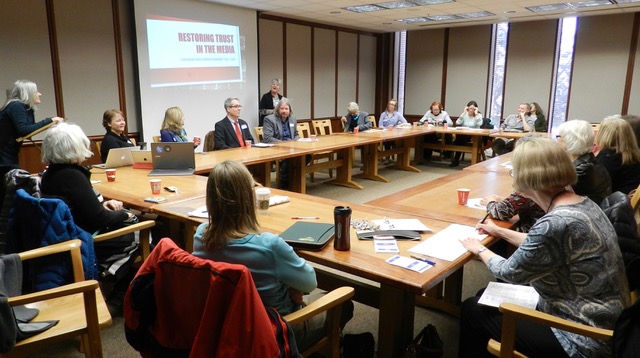 Journalism involves the hard work of looking at multiple angles of a story, sifting through all the information to decide what’s real and what can be ignored, and reporting accurately with enough backstory and context, the panelists agreed.

When she was young, Skewes recalled, her family read two newspapers and watched Walter Cronkite at night. People across America “used to have the common experience in watching and reading the news. People don’t do that anymore. Now, most people are cognitive misers. We gather just enough information to make a decision we are comfortable with.”

Plunkett cited three reasons for the current mistrust of the media. First, “I blame the media company owners.” He said a hedge fund owns a large stake of the Post and its parent company, Media News Group, so the focus is on the financial bottom line instead of the news. “One year we win the Pulitzer Prize, and the next year they cut the newsroom staff by 25 percent. So people feel betrayed… we’re not covering community meetings due to the sheer lack of manpower.”

Second is the rise of social media, 24/7, so, for many outlets, being first with news becomes more important than being right. “We need professional editors and reporters to make sure of the context and nuance of the story,” Plunkett said.

Third, copy editors and proofreaders were cut, so even small typos shake credibility in the paper. Competition from the internet is good for us, he said. “It makes us sharper, but if you add 25 or more people we will do a better job.”

Plunkett said a good editorial, op ed or letter to the editor is “based on facts, hashed out, thought through.” He and his staff spent 10 to 12 hours on one editorial about the oil and gas severance tax, talking to the Colorado Municipal League, reading reports and financial spread sheets and discussing it before writing the piece. Plus, the staff has developed collective knowledge over time that provides the critical back story.

“Newspapers should write more articles explaining how you research a story and the sources you use to come to a decision, to let readers know more about the process,” suggested Gay Porter DeNileon of Colorado Press Women, citing an informative Post article about the intricacies of the White House press pool.

Plunkett agreed, “We are too quiet on how we do our job,” adding that the Post received a lot of positive feedback on that article.

Plunkett said it’s very difficult and demoralizing when the President of the United States tells journalists to “shut your mouth and that you are the opposition party.”

He said, “When I’m in the newsroom besieged by complicated decisions, I must make decisions quickly. So I have to stay focused, stick to fundamentals, make solid journalistic decisions, and have the flexibility, creativity to do good stories.”

Social media can lead even trained journalists to marginal news stories, Plunkett said. “We follow statistics on whatever gets the most clicks, the most page views. It’s a huge temptation to chase a story to keep the numbers up.”

To which Skewes interjected, “You can never go wrong with a story on killing prairie dogs in Boulder!”

When moderator Peck asked, “What can we do to gain back the public’s trust?” Newton responded, “As a teacher in a public high school, one student, one class, one moment, one experience at a time, I can make a difference.” He said journalism “might be the most important class we can offer in high school.”

“Financial literacy is a requirement for graduation, why not a media literacy requirement?” Newton asked. The public doesn’t understand the role of the media, he said, adding that it’s incumbent on journalists to stand up for freedom of information and expression just as people have started chipping away at the First Amendment.

Journalism is a gateway degree, Newton said. With it a person can do anything: collaborate, be a critical thinker and a problem solver, be creative and know how to communicate. But the word “journalism” has been phased out of colleges and “journalism education is undervalued. People go to the ‘media that I want’ rather than the ‘media that I need,’” Newton said. “Media class teaches engaged, informed citizenship.”

Scofield Clark agreed that media literacy and media competency are important, and noted that educators must help young people learn how to put together news and use the media to make a difference, to leverage their resources to bring about change instead of just going to media outlets that reflect their own values and ideas.

“Our society as a whole is much more stratified than ever,” Schofield Clark said. “It’s easy for us not to interact with people who have life experiences that are different than ours.” She said the “onus needs to be on social media [such as Facebook and Twitter], as distributors of ‘news,’ to build into their algorithms” methods to sort out ‘fake news’ and provide users with a variety of views, not just ones that the algorithms calculate the viewers will like.

“What does it mean to be a responsible adult in the world?” Plunkett asked. “We all need some level of daily education on what’s going on. We’re just dumbing everything down. People are less informed, more angry and divisive. It’s too easy for people to listen to one source. We need to make ourselves uncomfortable and listen to multiple sources. We’re becoming tribal in the U.S. Politics is the new religion for us.”

Noting that newspaper subscriptions are up, Plunkett wondered if younger people are part of that trend. “How do we get the young people to care about us as news organizations?” he asked. “At some level, we owe it to the social contract to subscribe” to and pay for a news service.

Journalists need to reinforce critical thought, Skewes said. “There’s power in the individual and social media connections. Before we retweet, do we verify it’s from a reputable source? Each of us can be opinion leaders in our own spheres. We have to trade in real information ourselves. We need to subscribe to actual news sites and call people on their crap.”

“We read what doesn’t challenge us, so we end up not understanding a whole swath of the country,” Skews continued. “Yes, we should talk about politics (in respectful ways).  We’ve got bridges to build. Start with questions like, “What made you decide…?

“We need to do a better job of helping persons understand how they are getting their news” affects their opinions and outlook, Skewes said. “It’s not just the message, but also the medium.”