Ruth Anna, a former president of the Colorado Press Women and the National Federation of Press Women, was honored by Colorado Freedom of Information Coalition, where she had been a longtime board member, at the March 16 awards lunch in downtown Denver. 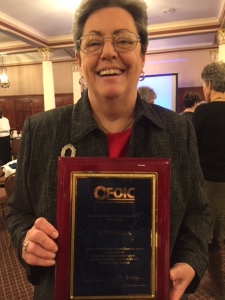 The award, named in her honor, recognized the public relations specialist’s decades of work promoting open records law and free speech. Anna continually pushed for diversity in CFOIC’s activities and view points, including diversity “in race, in gender and in political belief,” said CFOIC board member and retired Denver Post political editor, Fred Brown, who presented Anna with the award.

Anna, touched on that theme when she spoke to the more than 130 journalists and government officials, including a dozen or so CPW members, at the event. She said she was wary of young people, including college students, who say they believe in free speech but balk at viewpoints that make them uncomfortable.

Sunshine Week is a national initiative to boost understanding among young people, and all Americans, of the federal and state freedom of information laws and the vital role they play in a democratic society. CFOIC’s workshop, “Sunshine in Your Pocket,” also celebrated 50 years of Colorado Open Records Act and highlighted open government laws and court access, the tools citizens and journalists need to shine a light on government.

Also honored at the awards lunch was State Sen. John Kefalas of Ft. Collins, who received the Sue O’Brien Award for Public Service. Kefalas was instrumental in the passage last year of a bill that helped to modernize Colorado’s open records law.

Dulacki presented a clear outline of how the open record laws work but noted that the demand for records has grown faster than government resources to provide them have.

“I just want you to also understand there isn’t the capacity to deal with the explosion of the requests that most governmental agencies are getting,” she said.

Here are some highlights from her presentation and the many other info-packed presentations at the workshop:

•    You don’t have to explain or justify why you want a public record.

•     You don’t have to be a journalist to request a public record.

•  You don’t even have to live in the state to ask for a public record from a state agency.

•     You can request digital public records in sortable or searchable formats if that’s how the records are kept.

•    You don’t necessarily have to put your records request in writing. Some agencies, including the Colorado Secretary of State’s office, don’t require it. Check first.

•    You can put a limit upfront on how much you will pay for copying fees. This can head off the potential you’ll face something like the $1 million tab the Jefferson County wanted to charge to charge to get and review the sheriff’s emails after the Columbine High School shooting.

•  CORA doesn’t cover all the public records to which you are entitled. Jail records and court documents, for example, are covered by Colorado Jail Records Law, C.R.S. 17-26-118. Documents from city council or school board meetings are covered by Colorado Open Meetings Law, C.RS 24-6-401, which was covered by attorney Kendra L Carberry, a partner at Hoffmann, Parker, Wilson & Carberry. She addressed the thorny issues of executive sessions and the question of whether an email exchange between government officials is considered a meeting and thus subject to public disclosure. Answer: possibly.

Here are some tips from a workshop handout that focuses on the Colorado law but could be applied to other states’ government transparency laws as well.

•    Learn it. Look up the specific law and all the following language that is part of that law, which in Colorado is C.R.S. 24-72-201. Make a copy and keep it on your computer or print it out to carry with you. Read it regularly and refer to it whenever you are thinking about asking for records.

•     Ask first. If you are interested in a public record, start by asking for it, not necessarily filing a written request.

•    Be specific. If you have to make a written CORA request, narrow your focus and the timeframe from which you are asking for documents.

•     Include your own letter. You may have to fill out an agency-specific form, but always include your own letter citing the CORA statute. This is where you’d include any limits on copying fees you want to pay. Vaughn, of 9News, for example, always asked to be contacted if it will cost more than $25.

•    Be professional. If you are faced with an unfriendly records custodian don’t argue and risk having your request tied up. Be polite, but firm.

•  If denied, try a workaround. Does another agency have the same records? Are there other provisions in the law that would give you access to certain information, such as the jail records law and the so-called Golden Parachute law, C.R.S. 24-19-105(1)(a) that says the amount of money paid to settle a government employment dispute is public record.

Some great information has been posted on the CFOIC website, for your use, including the template for a CORA request — Resources – Colorado Freedom of Information Coalition.