Randy Thurston is on a mission to dispel many of the preconceptions about Pueblo, Colo. When asked about what makes his hometown special, the former Pueblo City Councilman easily can come up with more than 30 reasons. Three hundred days of sunshine tops the list that also includes a well-kept landscaped riverwalk, a symphony, zoo and an art center, multiple museums, a notable chili festival, the local food favorite “sloppers” (open-faced cheeseburgers topped with green chili) and much more. Steel mill? Still operating. It recycles steel.

Thurston touted the city’s attributes and shared some of its history with a small but enthusiastic group of Colorado Press Women who traveled to the southern Colorado city recently to learn more about the community. In addition to hearing Thurston’s presentation, the CPW delegates toured Colorado State University-Pueblo’s  Mass Communications and Center for New Media facilities and learned about the program from Department Chair Leticia Steffen and student ambassador Dez Rowe.

Thurston, a real estate broker and local history buff, also acknowledged some of the issues that still dog the city of 100,000. In seeking to bring new businesses and jobs to the community, city officials “never fully broke out of the industrial thinking” that was fostered during the heyday of steel production and unions. Subsequently, “we are losing our kids” to better jobs and opportunities elsewhere, he said. 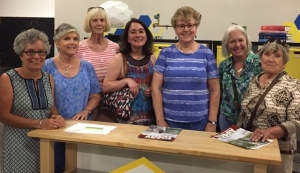 At the beginning of this century, the city wooed and won a large McDonnell Douglas aviation training facility with a tax incentive package. But when the incentive obligation was completed, the company left, leaving an economic hole that has been partially filled by the luring of the Professional Bull Riders headquarters and the Vestas wind turbine production facility.

Meanwhile, CSU-Pueblo offers an opportunity for a quality education on a small but well-equipped campus. The media department boasts full television and radio production studios, hands-on internships and individualized mentoring.

Senior student Rowe has experience both on air and behind the microphone. She demonstrated her disc jockey chops to the CPW crew with a promo tape she recorded earlier for the radio station, Rev 89, an award-winning student-run enterprise.