Ten years ago, a Pulitzer Prize-winning journalist visited his daughter’s classroom and got insight into why Russia was able to exploit Americans’ biases to try to influence an election.

Alan C. Miller, investigative journalist for the Los Angeles Times, founded the News Literacy Project after discovering his daughter’s middle school classmates had little idea of the reporting, editing and fact-checking that separate news from misinformation. 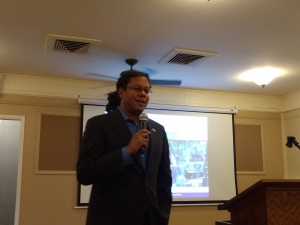 Damaso Reyes, an experienced multimedia journalist who is the project’s director of partnerships, quotes Miller as saying, “For a long time we were kind of a voice in the wilderness. And now we’re an answer to a prayer.”

Reyes spoke for more than 90 minutes — and the audience appeared ready to question him longer — at a July 11 event organized by Colorado Press Women to introduce Colorado to his nonpartisan nonprofit. The project works with major media partners to help high and middle school students around the world become engaged citizens and skeptical but not cynical news consumers.

“If you can’t tell what’s real and what’s fake … you’re going to have a hard time being part of a functioning civic body,” Reyes said.

About 50 journalists, educators and librarians who filled the Denver Press Club’s upstairs meeting room heard Reyes’s assurances that it’s possible to win the fight for facts, even as so many readers and viewers applaud the candidate Moscow backed when he, as president, tweets encouragement to brand as “fake” the news he doesn’t like.

The News Literacy Project has surveyed students who have studied its curriculum and found they credit the lessons with helping them to distinguish between good journalism and other types of information and to use news to learn about their communities, the nation and the world. A significant number also say that because of the lessons they will be more likely to cast ballots when they reach voting age.

Students may even learn to value news enough to seek it out and pay for it, Reyes said.

“You have to create demand for journalism in order for it to succeed and flourish,” he said.

Still, “there’s going to be some subset of the people that’s just going to believe what they want to believe,” Reyes acknowledged. 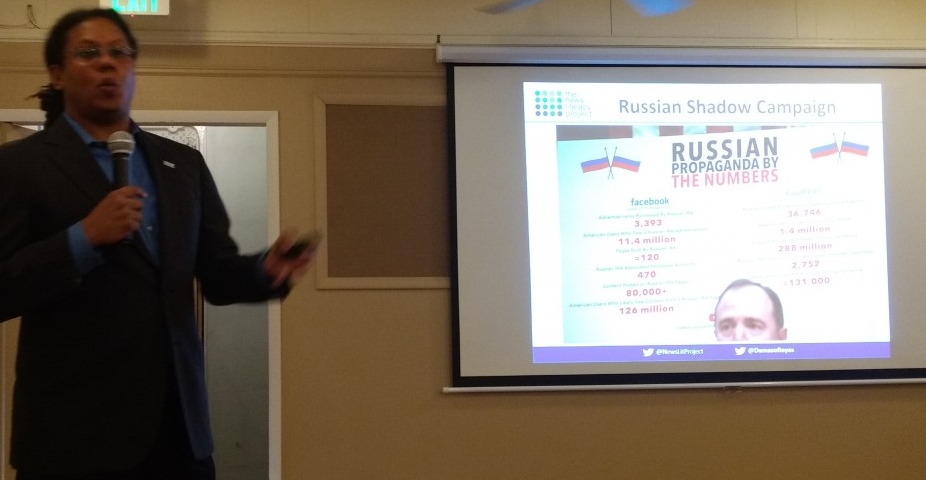 The News Literacy Project focuses on people who are young enough to be open-minded and are captive in the classroom for at least a few hours during the week. Librarians have experimented with offering the project’s curriculum in afterschool and vacation programs.

The project’s flagship Checkology program is an online curriculum that any teacher or librarian with an Internet connection and a projector or smart board can use to engage students in such topics as how to sort news from opinion and advertising, and the basics of the First Amendment.  Students role-play journalists and respond to quizzes and writing prompts. They are taught that the first rule of news literacy in the digital world is not to share an article if they doubt its accuracy, a lesson Reyes hopes they take home to their parents.

The News Literacy Project offers blogs and newsletters as resources for educators. It organizes daylong workshops that bring journalists and teachers together, often in newsrooms, for what Reyes called “discussions, not lectures.

“These are wonderful opportunities for educators to understand how journalists work,” he said, adding he hopes to organize one in Denver early next year.

Reyes is recruiting for his project a stable of journalists who volunteer to speak to students and educators.

Reyes did not play down the challenge, showing three pages of fake news websites with names that sound legitimate and noting that the Internet offers millions of slick videos, faked photos and click-bait headlines some people want to share simply because they are funny or make a point with which they agree. But the Internet also means the facts are within easy reach of anyone willing to make the effort to look.

“Each one of us has the tools,” Reyes said, pulling his smart phone from his pocket. “We all have the power to engage with the information and the media that is around us.”

Each of the classes the News Literacy Project offers ends with ideas for taking action. As the CPW event wrapped up, Reyes urged his audience to press their school board members, legislators and other decision makers to help make news literacy programs available in more classrooms.

“We can’t not teach this,” he said. “We have to teach this to our young people. We have to prepare them for the world they’re going into.”

Story and photos by Donna Bryson 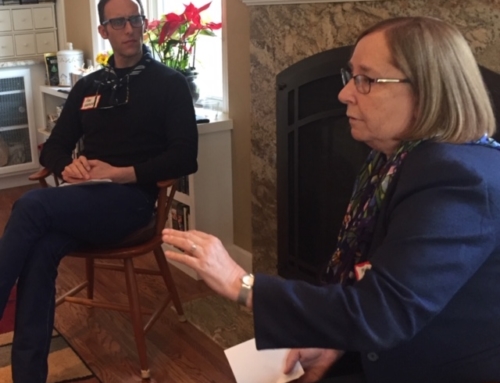