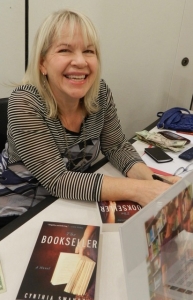 Finding a publisher took perseverance, luck and “taking myself seriously,” Swanson said. She treated the book as an investment and hired a developmental editor. After Harper Collins agreed to publish it, they delayed issuing it until after the mid-term election. “People have only so much attention span,” she said. The book is slated to be published in 12 languages.

A Pushcart Prize nominee, Swanson has published short fiction in numerous journals. “The Bookseller” was nominated for the Goodreads Choice Award and the MPIBA Reading the West Award and is a finalist for the High Plains Book Award and the Women’s Fiction Writers Association Star Award. She lives with her family in Denver and is working on a second novel. 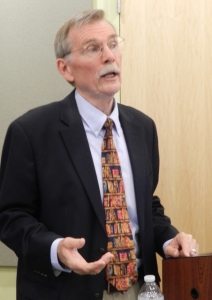 The second speaker, Jeff Miller, is a long-time magazine editor and travel writer who wrote “Behind the Lines: WWI’s Little-Known Story of Germany Occupation, Belgian Resistance, and the Band of Yanks Who Helped Save Millions from Starvation.” Germany had invaded Belgium and exerted total control over the country, allowing no mail, phones, newspapers, transportation or most importantly, food shipments to a country that relied on imports.

Herbert C. Hoover, a mining engineer living in London (later U.S. President), organized worldwide donations and funding to feed the country through his Commission for Relief of Belgium (CRB) in 1914.  Every day, 50 ships would sail into Rotterdam, Holland, where food was loaded onto barges, taken by canal into Belgium and distributed by a small group of Americans recruited for the CRB.

Miller’s grandfather, Milton M. Brown, was one of the young American CRB workers who met and later married a Belgian woman also involved in the effort. Miller’s book was included in Kirkus Reviews’ Best Books of 2014. He plans to write a second book about the massive relief effort. 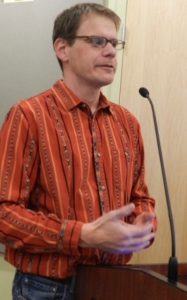 The third speaker, Nick Arvin, author of “The Reconstructionist,” was late to the meeting due to a car accident on I-25. It was an ironic twist, since his book is about an engineer involved in a love triangle who reconstructs auto accidents for lawyers and insurance companies. Arvin is a mechanical engineer who once worked reconstructing auto crashes like his main character, a sometimes emotionally difficult thing to do. As a result, he is a very cautious driver, which drives his wife a little bit crazy, he said.

Arvin grew up in Michigan, earned degrees in mechanical engineering from the University of Michigan and Stanford and attended the Iowa Writers’ Workshop. He has worked in automotive and forensic engineering and the design of power plants and oil and gas facilities. His two previous books were “The Electric Eden” and “Articles of War” (selected for One Book One Denver several years ago.) His work has appeared in the New Yorker, New York Times, Wall Street Journal, Salon and the Rocky Mountain News.

Arvin has received the Rosenthal Foundation Award from the American Academy of Arts and Letters, the Boyd Award from the American Library Association and the Colorado Book Award as well as fellowships from several groups. He is on the faculty of the Lighthouse Writers Workshop. He and his family live in Wheat Ridge, where “The Reconstructionist” was featured in the Wheat Ridge Reads program.

Story and photos by Ann Lockhart