Colorado Press Women started the new year with a program on”Exploring gender equity for professional women in journalism and mass communications in Colorado.” We used this gathering to launch a conversation about how far women have come in our members’ professions, how far we have to go, and how we can “lean in” to level the playing field for women journalists and communications professionals.

The panel discussion featured Prof. Tiffani Lennon of DU, Patti Dennis, VP at TEGNA, and Meghan Lyden of the Denver Post. The event was held at the CCD Confluence Building on the Auraria Campus in downtown Denver. 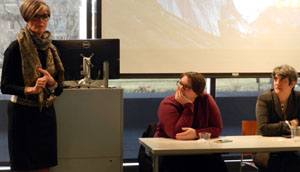 The panelists included a Denver professor/attorney/researcher who has lectured around the globe on gender equity; The Denver Post senior editor of photography and multimedia; and a longtime TV news director in Denver who is now TEGNA’s (formerly Gannett Broadcasting) national recruiting director.

Dr. Tiffani Lennon, of Colorado Women’s College at the University of Denver, author of gender equity research “Benchmarking Women’s Leadership” and the book Recognizing Women’s Leadership, asserted “gender bias exists” and cited data and studies on 14 sectors across the country to prove her point.

She said although huge strides were made from the 1960s to 1980s, and despite women dominating middle management in journalism, far fewer are in top management. However, the majority of the top magazines in circulation have women editors-in-chief.

She discussed the tale of six non-journalism companies and the importance of measuring performance and assessing the climate within the companies. She said most of the focus has been on selection in hiring and benefits, but that ongoing development for women and minorities provided by employee resource groups has been helpful. Companies with women in leadership tend to be more profitable, she noted.

The Denver Post’s Meghan Lyden leads a staff of 23 visual journalists. The mother of two young children acknowledged newsroom schedules and hours are hard on families and partners, and that, where possible, flexibility is important to retaining women. Her tip for getting a leadership position was simply to ask for it.

She told stories of the creative ways the paper’s women photographers overcame difficulties in covering major flood stories. She said most of the Post’s department heads are female and that The Denver Post has “lots of male feminists.” Nevertheless, after a Denver Broncos game there are more men in the press corps.

Patti Dennis spent 15 years working her way up at KUSA-TV and then worked 20 years as news director, managing 120 people in the newsroom and winning hundreds of local and national awards. More recently, TEGNA asked her to become director of recruiting TV journalists for its 46 TV newsrooms across the country. Honored nationally as a top news director and recognized for investigative work, she also works as vice president/regional news director at KUSA/KTVD.

She said as news director, she played tough guy at first. When one man continually undermined her, she took him aside and told him she was not going to stand for it and that it needed to stop. It did. She forged on and moved up.

She says having news leaders with vision, courage and innovation will be how the business of journalism survives. She believes women make good managers on many levels-they have good antenna, they are “gut” leaders and are less afraid to break the traditional norm.

Reflecting on changes she’s witnessed, she said there’s a “fire hose of information flowing now” 24 hours a day, which makes a journalists’ job much tougher. “Anybody can publish now,” so there’s been a massive change in how people get news. “We’ve had to redefine what is news. Consumers are ahead of us,” she said, noting that citizens often break the news to the station instead of vice versa. 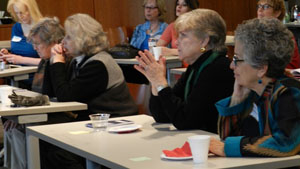 But she asserted journalists still need to be the watchdogs of society, and the journalist’s first job is to verify facts and put them into context. During crises, people come back to mainstream media. But being first and wrong is bad; it’s better to be second and correct in news. She said transparency in the news process is important; viewers want to know how news choices are made.

Another change from yesteryear’s journalism relates to the “iron curtain” that used to segregate the newsroom from other departments in the company. Journalists need to know all parts of the company these days, including how to monetize the news, she said.

The event took place at Community College of Denver’s building on the Auraria campus and was co-sponsored by the SPJ student chapter at Metropolitan State University of Denver, which shares the campus. Students and faculty from MSUD, the University of Northern Colorado, CU-Boulder and Colorado State University attended.