Ever since the University of Colorado-Boulder announced a radical remodeling of its journalism-mass comm school, we’ve been eager to learn about the new plan. When the first dean of the new college turned out to be a woman who was on the national advisory board of the Poynter Institute, a member of the Arthur W. Page Society and president of the Association for Education in Journalism and Mass Communication, we begged to meet her. We got our chance May 21. 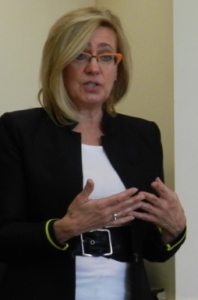 Lori Bergen a fifth generation Swede from Salina, Kansas, and the founding dean of the University of Colorado’s new College of Media, Communication and Information (CMCI) told Colorado Press Women and other writers that digital, video and mobile are the direction of the

“People want to see it and watch it move,” she told the nearly 30 at CU’s University Memorial Center Sat., May 21 in Boulder. She said jobs in the future will be very digital dependent. Colorado Press Women members were joined by members of the Denver Woman’s Press Club, Boulder Media Women and JAWS.

Bergen described her varied background from working for U.S. Senator Bob Dole, then switching to journalism for her master’s and working at the Poynter Institute in 1983. She taught at Kansas State University, Texas Tech and Marquette University. She also worked for Kansas Public Television, the Bloomington Herald and the Sacramento Bee.

“There’s no better job than being a journalist,” she said, since you can use your natural curiosity and have an impact.

She described the seven new academic units in the new college, which arose from combining the former Journalism and Mass Communication School with other disciplines. They include the Departments of 1) Journalism; 2) Advertising, Public Relations and Media Design; 3) Media Studies; 4) Communication; 5) Critical Media Practices; 6) Information Science; and 7) the Intermedia Art, Writing and Performance PhD Program. The largest program is Communication with nearly 800 students. Information Science is about how humans and data interact and using data to solve real world problems.

“This is the first new college at the University of Colorado in 53 years,” she said. She wants the students to be able to work in groups, pivot on a dime and push to be fearless. About 70 percent of the students are women, but the students now are a different cohort of women, with a different work/life balance goal, she said.

Asked what CMCI can contribute toward achieving gender equity in the communication professions, Bergen quickly replied, “Give them role models” and pointed to herself.  She added that CMCI is emphasizing equipping women with information science skills because that male-dominated field is the trend for the profession. CMCI’s classes in leadership skills will also help.

Bergen said the college also has several centers:  Center for Environmental Journalism; News Corps; BoulderTalks (which holds the TedX license) ; and Center for Media, Religion and Culture. Also, one professor has developed the  Media Archeology Lab which has a collection of past communications devices.