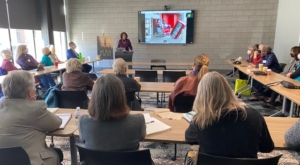 Among the three writers who addressed about 30 people – some via Zoom but most in person in a conference room of the Buell Public Media Center in the heart of Colorado’s capital – was Jenny Shank, a graduate of Denver’s Cole Middle School and Thomas Jefferson High School who once interned for a famed hometown concert promoter. Patricia Raybon, who also spoke at the Author’s Lunch and last month published her first mystery novel, once edited The Denver Post’s Sunday Contemporary Magazine and wrote features for the Rocky Mountain News. 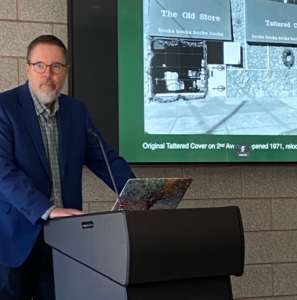 And what could be more bookishly Denver than the Tattered? Denver native Mark Barnhouse opened the Author’s Lunch with a talk on one of his latest local history books, “Tattered Cover Book Store: A Storied History.” Colorado Press Woman Sandy Graham said in introducing Barnhouse that “just reading the titles of his books is like a tour through the city.” They include “Denver’s Sixteenth Street,” “Northwest Denver” and “The Denver Dry Goods: Where Colorado Shopped with Confidence.”

Barnhouse was at work on a book on vanished Denver landmarks when his publisher, Arcadia’s The History Press, asked him to write a book to help celebrate Tattered’s 50th anniversary. The University of Colorado Denver grad was an obvious choice both because of his previous books and because he worked at Tattered from 1994 to 2000.

“I was a Tattered Cover employee for the most interesting five and a half years of my life,” Barnhouse said.

Barnhouse took his Buell audience on a Tattered tour, starting at its 1971 founding by Stephen Cogil Casari in what is now the lower level of the Men’s Wearhouse in Cherry Creek. Joyce Meskis, who had worked at her college bookstore and owned a bookshop in Parker, bought Tattered in 1974 from Cogil Casari. Meskis expanded Casari’s 950-square-feet Cherry Creek shop to a department-store size space, hosted reading by such writers as Madeleine Albright, Julia Child and Michelle Obama, oversaw several moves and green-carpeted branch openings – including one that helped revitalize lower downtown Denver.  Meskis also built a reputation as a First Amendment champion.

Meskis sold Tattered in 2017 to Kristen Gilligan and her husband Len Vlahos, who last year sold it to a group of investors led by Denver natives Kwame Spearman and David Back. The store’s history is also a history of Denver’s bust-and-boom economy, political and social movements, and Amazon’s impact on the book industry.

Barnhouse remembers first visiting Tattered in 1980, in search of a complete Dickens set. He found three shelves of Dickens at Tattered.

“I needed a store that would have everything. And guess what? Tattered Cover did,” he said. “Joyce always wanted to stock as much as she possibly could.”

Myriad personal histories are woven into Tattered’s tale, as evidenced by the number of hands raised when Barnhouse asked who in his Buell audience remembered their own first visit. Colorado Press Women Treasurer Mary Parmelee was among the 300 volunteers who helped Meskis transfer books from the original Cherry Creek shop to a much larger space in 1983. 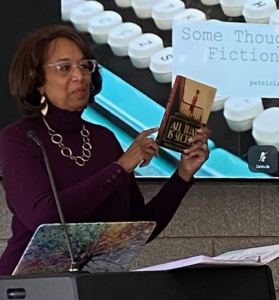 As Raybon took the Buell center podium, she asked Barnhouse to give her regards to a former Tattered Cover staffer she said she remembered for “her kindness to authors no matter where you were on the food chain.”

University of Colorado Boulder professor emerita and former Rocky and Post staffer Raybon has published nonfiction books that include “My First White Friend” and “Undivided: A Muslim Daughter, Her Christian Mother, Their Path to Peace.” Her essays on race and faith have appeared in “The New York Times Magazine” and elsewhere.

Raybon offered tips on transitioning from nonfiction to fiction as she described writing and finding a national publisher for “All That Is Secret,” the first of a planned three-book series. Raybon’s debut fiction book features a Sherlock Holmes-loving theologian who leaves her small Chicago Bible college to return to her hometown of Denver to solve the mystery of her father’s murder. The book is set in the 1920s, when Blacks such as the heroine of “All That Is Secret” had to contend with the KKK’s hold over Colorado.

Raybon tackled fiction like a journalist, by first doing her research. She watched webinars and consulted books by experts such as Hollywood script doctor John Turby, publisher Sol Stein and mythologist Joseph Campbell.

“I began to appreciate the mystery as a tight, focused story where the protagonist had a clear desire line – that is, whodunit,” Raybon said.

During the pandemic, Raybon reworked an early attempt she had made at writing a mystery. Her nonfiction agent agreed to represent her fiction on condition she hire a fiction editor to help get “All That Is Secret” ready to present to publishers.  Tyndale released the book in October, and it has been named by CrimeReads as among the five best debut novels of October and by BookBub as among 16 all-time best historical mysteries. Denver Chicano noir novelist Manuel Ramos – who spoke at a CPW Author’s Lunch in 2015 – called “All That Is Secret” a “fast-paced, intriguing mystery that grabs and holds the reader from the opening.”

Raybon said some of the highest praise came in the form of a photograph a friend sent her of the friend’s father, who is not a big reader, absorbed in the book.

With “All That Is Secret,” Raybon said she can reach an audience that might not have read her nonfiction and engage with these new readers on the issues of race relations and faith that she addresses in her journalism and essays. 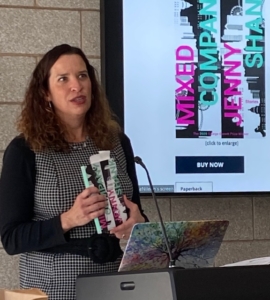 Shank cited as an inspiration James Baldwin, who told LIFE in 1963: “You think your pain and your heartbreak are unprecedented in the history of the world, but then you read.”

She often shows it with humor in “Mixed Company,” which includes stories published over two decades in such journals as “Barrelhouse” and “Prairie Schooner.” The collection is scheduled for release Nov. 15 by Texas Review Press, which awarded “Mixed Company” its 2020 George Garrett Prize for excellence in a short story collection or novel.

Shank’s publication date was delayed because of pandemic-induced supply chain delays. She got advance copies to distribute on her own, which came in handy both for the CPW event and when a friend who is a script supervisor reached out.

Shank said the friend was working on a movie with Anya Taylor-Joy of “The Queen’s Gambit” fame and had seen the actress constantly reading. Wanting to give Shank a boost, the script supervisor asked for a copy of “Mixed Company” to give to the actress. Shank sent the book overnight, and her friend reported that Taylor-Joy “seemed genuinely moved.”

“But she’s an actress. So I don’t know,” the friend reported, to Shank’s amusement.

Shank described growing up when Denver was under a court-ordered desegregation plan, being bused across town from the age of six and learning it was normal to see and hear people from other cultures.

Her writing also has been inspired by the people and situations she has encountered in a variety of jobs. In addition to interning for concert promoter Barry Fey, Shank’s CV includes such jobs as a stint in community relations for the Rockies and tutoring CU football players.

These days, Shank is on the faculty of Regis University’s Mile-High MFA program, teaches at Lighthouse Writers Workshop, reviews books for several publications and writes a monthly literary newsletter called “The Tumbleweed.”

Thanks to the CPW committee that brought together Shank, Raybon and Barnhouse and helped put together the Nov. 6 event: Sharon Almirall, Bobbi Gigone, Sandy Graham, Ann Lockhart, Gay Porter DeNileon.