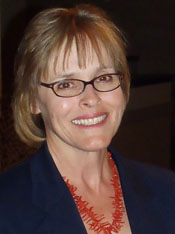 Sandy Graham has parlayed a successful journalism career into grant writing for a beloved Colorado institution, the Children’s Museum of Denver. While the transition may have surprised some people, Sandy saw it has an opportunity to use her research, interviewing and writing skills for a great cause.

Despite only dabbling in small-time fundraising at her children’s schools years ago, Sandy can claim the accomplishment of raising $2 million dollars during her five-year museum tenure. The facility is in the midst of an ambitious $15.8 million capital campaign, and construction broke ground in early April 2014.

The dwindling job market for journalists in 2009 helped nudge Sandy to change her career focus. Never afraid to take risks, even academically as a college student, she has amassed an impressive portfolio.

Journalism wasn’t her original career goal, though. Born in Chicago to a mechanical engineer (father) and a secretary (mother), Sandy was raised in Schererville, Indiana. As she approached her college years she wanted to try something challenging — and chose math at Butler University on a full-tuition, academic scholarship. Calculus got the better of her, though, and during the holiday break of her sophomore year, she knew it was time to investigate another path.

Sandy thought back to her teen years when she attended a journalism workshop at New Mexico State University in Las Cruces, N.M., a state where she enjoyed summer camping with family and friends.

“Basically, I stumbled into journalism because I liked New Mexico,” Sandy recalls.

She contacted the journalism program at NMSU, and by the next year had moved to Las Cruces to launch her career in journalism. As a student she asked to cover an area other students didn’t covet — the Agriculture School— and it led to many front-page features.

Sandy, who graduated with highest honors and a bachelor’s degree in journalism, received three job offers. She accepted a reporter’s position with the Albuquerque Tribune and primarily covered medicine and science, including Sandia and Los Alamos National Laboratories. She watched coronary bypass surgery (and considers seeing a beating human heart one of her most amazing experiences), a kidney transplant, and knee and hip replacement surgeries, seated at the side of the anesthesiologist.

As needed, she also covered police, county government, state and federal courts, and general assignment. Moving up to assistant city editor, she supervised five photographers, and assigned and edited stories for 14 reporters. She also ran the Saturday city desk.

While attending her first NFPW national conference in Chicago, she heard Meg Cox of the Wall Street Journal speak and encourage women to apply for an opening at that paper. So Sandy did — and she got the job. She became the medical and energy writer in the Chicago bureau, covering about 150 companies in 10 Midwestern and western states, including Chicago-based oil companies and Midwest utilities. Her favorite Page 1 “leader” (a column 1 or column 6 story in “journalese”) was about the medical establishment protecting bad doctors.

Sandy next landed a job as the environmental, energy and medical writer at the Rocky Mountain News in Denver. She covered air quality, public lands, electric utilities and oil shale development. It was here where Sandy distinguished herself with tenacious reporting about Fort St. Vrain, Colorado’s only nuclear power plant that was offline more than it was online producing energy.

Various news stories she authored noted that rate-paying customers were propping up an underperforming and expensive facility. Eventually, Fort St.Vrain, north of the Denver metro area, was decommissioned – and consumer advocates told Sandy she could take some credit for that outcome.

Stories took her on tour with the controversial James Watt, former secretary of the interior; riding horses into the Flattop Wilderness to learn about acid rain; crawling on her knees through a mine in Paonia (Colo.); hiking in the Gros Ventre Wilderness in Wyoming for a story on oil and gas drilling; and staying with noted conservationist and author Mardy Murie at her cabin in the Grand Tetons.

For five years Sandy was a fixture on KRMA TV’s “The State of Colorado,” a weekly news program. She also was a guest lecturer at the University of Colorado and the University of New Mexico, and spoke to many community and professional groups to clear up misunderstanding about the press and chronic undervaluing of the First Amendment.

Sandy served as assistant city editor for several years at the News, and she supervised 12 reporters, including general assignment, medical, environmental and legal affairs writers. Among special projects she planned and directed were coverage of a mayoral election and a Denver Broncos appearance in the Super Bowl.

When Sandy’s husband’s career took them to Washington, D.C., she worked as a copy editor for Gannett News Service and a freelancer primarily for USA WEEKEND, writing lifestyle, entertainment and trend stories. She then pioneered USA WEEKEND’s first job-sharing arrangement, serving as content editor and working with freelancers.

During this phase of her writing career she enjoyed interviewing authors Jean Auel and Robert Ludlum, and singer Jett Williams who discovered in adulthood her father was Hank Williams.

Five years later Sandy and husband Blair Johnson, with two young children in tow, moved back to the Denver area. She did a variety of freelance writing and editing work, including managing editor and principal writer for Health Elevations, The Colorado Health Foundation’s award-winning quarterly journal.

Sandy, a longtime resident of Columbine Valley, a small town in the south Denver metropolitan area, joined the town’s Planning and Zoning Commission in 2002. She was elected chair of the group in 2008, a position she still holds. The time commitment has increased greatly as the community considers a controversial housing proposal for the town’s largest undeveloped tract, 105 acres of pasture adjoining the South Platte Greenway.

Past volunteer work has included helping in her children’s classrooms, elementary through high school; and helping with Scouts and girls and boys soccer. She also served as a student adviser and mentor in the Post-Graduate Centers at Heritage and Littleton high schools, Littleton Public Schools.

The past two years she has helped to judge entries for the prestigious Al Nakkula Award for Police Reporting, sponsored by the University of Colorado journalism program. She is a member of the organizing committee of the New Mexico State University Alumni Front Range Chapter, and currently is serving as a volunteer grant writer for St. Timothy’s Episcopal Church Touring Choir’s 2014 mission trip to Great Britain.

Sandy also is a member of the Golden Retriever Rescue of the Rockies and a new volunteer at Swallow Hill Music (“roots” music center in Denver).

Sandy and Blair’s children are now young adults and college graduates: Jaime, a music teacher in the Douglas County School District, and Reed, a management trainee at Pepsi Co. in Denver.

At the museum where Sandy often took her young children years ago, she now she speaks with excitement about new features under development. Upgraded exhibits and programs will address the unique educational and developmental needs of Colorado’s young children. With an expanded structure and nine-acre campus, the museum will emphasize interactive ways to learn about all disciplines, particularly science, math and the arts. It will offer 47,000 square feet of indoor space (a 41 percent increase) and 30,000 square feet of outdoor space to captivate Colorado’s youngest learners.