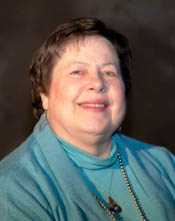 An editorial innovator, inspiring leader, patience of a saint, the most ethical person I know, walks her talk, a big heart, extraordinary sense of humor.

This is how colleagues and friends describe Mary Alice Parmelee, Colorado Press Women’s 2013 Communicator of Achievement.

The award, given annually, recognizes a member who exemplifies professional achievement, community service and involvement in CPW. The Colorado nominee is entered in the National Federation of Press Women’s COA contest. The national winner will be announced at the NFPW convention in August in Salt Lake City.

Mary Alice, a Coloradan since childhood, is a graduate of the University of Colorado at Boulder. Happily for journalism, she couldn’t find a teaching job in which to use her English degree as she’d hoped upon graduation, and through some twists and turns ended up a couple years post-graduation at the American Water Works Association as associate editor of its flagship publication, Journal AWWA. There she has remained for nearly 37 years. She later became editor of the association’s Willing Water publication. Then she put her job on the line and argued successfully that the organization should launch a new publication to cover water news. That led her to create MainStream.

While she began her career in the age of manual typewriters and IBM Selectrics, Mary Alice has willingly and relatively painlessly embraced the digital age. In 2009, Mary Alice led AWWA efforts to create a fresh, new and fully electronic publication called Streamlines for water news, features and association communications. How many of us can say we have had hands in launching a single publication? Mary Alice can boast two.

In 2012, Mary Alice was promoted to senior manager of AWWA periodicals, supervising 10 employees. In that position, she oversees Opflow, a monthly magazine about water treatment and distribution operations, and Journal AWWA.

Some of you may recall her late mother, Mary Lou, who also was a journalist and a longtime member of CPW. In fact, Mom brought Mary Alice to her first CPW meeting in 1975. Bobbi Gigone, Marlys Duran, Ann Lockhart and Glennys McPhilimy, still Press Women today, were there.

Mary Alice has served the organization as secretary, chair of both the communications contest and high school communications contest (several times each), membership vice president and a volunteer for the two NFPW conferences the state has hosted over the years. She has a file filled with awards from CPW and NFPW for news and feature writing, personal column, writing for the Web, editing publications, layout, headline writing and annual reports.

In addition to volunteering for CPW in a variety of positions, Mary Alice has been a nearly lifelong member of the Washington Park United Church of Christ and is an important lay leader in the congregation. She is a blood platelet donor and a supporter of the arts, especially women in the arts. She still lives in the Washington Park home her parents bought in Denver when she was little.

Some might think spending a career writing about water would be a little – dry. Sorry, couldn’t resist. But not Mary Alice.

“People really don’t think about what comes out of their taps or goes down their drains,” she says. “The people I write for know there is nothing more critical to your health or the health of your children than safe drinking water. I always wanted to make sure that my water stories really emphasized how critical it is for people to have safe drinking water and that the people working in this field have all the resources to fulfill their jobs. Every time I have to write a death-by-water story, I am rededicated to that goal.”

Like me, Mary Alice was in her high school production of “Bye Bye Birdie,” and a gathering not long ago at Ann Lockhart’s house proved she and I still know large parts of the opening number, “The Telephone Hour.”

But I promise you that’s not on today’s program.