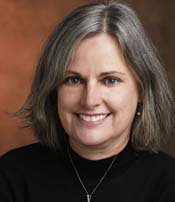 “Honey, don’t go into journalism. Take your talents as an artist and go work for Hallmark.”

This was not an off-hand remark from a casual acquaintance to Lee Anne Peck, Colorado Press Women’s 2009 Communicator of Achievement. This was advice from Helen Benedict, Lee Anne Peck’s beloved grandmother and a pioneering female journalist at Iowa’s Sioux City Journal. Fortunately for the profession, Lee Anne didn’t listen to her grandmother.

During her career as a columnist, reporter, editor, Fulbright scholar and journalism professor, Lee Anne has worked for print and online publications across the country. After deciding she wanted to share her love of the profession with young journalists, she began teaching 20 years ago and has evolved into one of the nation’s experts on journalism ethics. Lee Anne earned three master’s degrees and a doctorate – the Ph.D. coming after she was diagnosed with multiple sclerosis, an autoimmune disease.

In addition to excelling as a professor and a practicing journalist, Lee Anne is a volunteer who rarely says no. She gives time to a variety of community causes, including the Multiple Sclerosis Society, student journalism groups at the University of Northern Colorado and Colorado Press Women; she currently serves as membership co-chair. In short, Lee Anne Peck epitomizes the well-rounded professional that NFPW recognizes with its Communicator of Achievement Award.

Lee Anne was born in 1954 in Evanston, Ill., into a family of communicators. In addition to Grandmother Benedict, one of the first female graduates of the University of Illinois’ journalism program in the mid-1920s, there was uncle Howard Benedict, who covered the U.S. space program for the Associated Press for 37 years; aunt Joy Benedict, who wrote for a variety of Florida newspapers; dad Leo Peck, an advertising executive, and mom Connie Peck, a restaurant reviewer. Lee Anne launched her career early: As an 11-year-old, she published the Peck Daily News – from an upstairs closet “newsroom” with the help of her younger brother, Jeff, and her sister, Megan.

Lee Anne grew up in Moline, Ill., where her father worked for agricultural equipment-maker John Deere. When she was in eighth grade, the family moved to Germany when Mr. Peck became Deere’s advertising director for Europe, the Middle East and South Africa. After graduating from the U.S. Army’s high school in Heidelberg, Germany, Lee Anne enrolled at the University of South Dakota, her father’s alma mater.

She chose to study art, but quickly found she didn’t mesh with her major or the city of Vermillion. She was a flop when it came to mixing clay for pottery class or matting her drawings, and South Dakota was serious culture shock after Europe.

She dropped out, returned to Germany, and worked in a shoe store. The tedium of selling shoes quickly convinced her she did want a college education, so it was back to the States for a junior college associate’s degree in journalism. While working for the Moline Daily Dispatch in 1976, her editor suggested she complete a four-year degree, so she enrolled at Colorado State University.

Two years later in 1978, Lee Anne was married, pregnant – and the proud owner of a bachelor’s in journalism from CSU. After stints as a caterer, a waitress and a stay-at-home mom (with her son, Davis, now 30 years old), she went to work for Choice Magazine of the Front Range in Fort Collins and worked her way from office assistant to editor in the course of two years.

After she and her husband divorced, Lee Anne and her son moved from Colorado to Indiana to Delaware and back to Colorado. In Columbus, Ind., in 1983 and 1984, Lee Anne transformed a traditional women’s section to a lifestyles section – with suggestions from her grandmother, who had been women’s editor in Sioux City.

In Colorado again in 1985, Lee Anne worked as a reporter, editor and columnist for the Fort Collins Coloradoan. Lee Anne also began teaching journalism at CSU as an adjunct instructor. She earned her first master’s degree in 1989 in English.

Lee Anne jokes that she was such a poor student in high school that she’s atoning for her past by teaching. But in truth, she enjoys sharing her love of writing.

“I like teaching students how to write because that’s important to me. I’ve always been a writer,” Lee Anne said. Even now, in addition to her scholarly work, she writes occasionally for popular publications through Little White Dog Communications, her freelance writing business.

Lee Anne also wanted to help young journalists avoid some of the ethical issues she experienced in her early years as a professional.

“I’m just appalled when I think of some of the things I did,” Lee Anne recalled. “I was young, afraid to speak up, even when I thought what I was doing wasn’t right.”

She remembers being sent by a Colorado editor to write about bed-and-breakfast inns; one inn paid all her expenses. And she remembers when another editor didn’t like one of her leads – calling it “not sexy enough” – so the editor created a sexier uncomfortable opening.

Peck left the Coloradoan in 1993 and began working as a copy editor part-time at the Rocky Mountain News while she continued teaching part-time. In 1994, she was chosen to be a Poynter Fellow at the Poynter Institute for Media Studies in St. Petersburg, Florida. At the University of South Florida, she met Professor Jay Black, who became a mentor and got her started in her ethics research. She earned a second master’s from USF in 1998 in journalism studies.

She returned to Colorado, resumed working part-time for the Rocky, and returned to teaching at CSU. Her department chair told her she needed a doctorate; her two master’s degrees weren’t enough. So Lee Anne set out to become Dr. Peck. She was offered a fellowship to study in a unique journalism ethics Ph.D. program in mass communications at Ohio University, and this required a master’s in philosophy. So she earned both degrees simultaneously – despite the fatigue she battled daily from her multiple sclerosis, which was diagnosed in 1996. Her degrees from Ohio are the personal accomplishments of which Lee Anne is most proud.

After finishing her philosophy master’s and her coursework for her doctorate in 2001, Lee Anne was offered a position at Franklin College Switzerland, a small American liberal arts college in Lugano. She couldn’t pass up a chance to teach communications internationally, so she went – returning to Athens to successfully defend her dissertation in 2003.

After a two-year stint at Franklin, Lee Anne Peck, M.A., M.A., M.A., Ph.D., returned to Colorado and began teaching journalism and media ethics courses at the University of Northern Colorado in Greeley. But her international travels weren’t over. In 2007, she received a Fulbright grant to study and teach at the University of Dubrovnik in Croatia for a half-year. With the support of Colorado Press Women members, Lee Anne brought one of her Croatian students to Colorado to work as a photo intern at the Greeley Tribune.

“It was a wonderful experience for her,” Lee Anne said. “She shared what she learned about the U.S. media when she went back. They don’t have as much freedom in Croatia as American media do.”

In addition to honing UNC students’ writing skills and teaching them ethical decision-making, Lee Anne currently advises the Public Relations Club. She also believes in helping students become socially responsible citizens – it is literally part of her job description at UNC. A few years ago, students in her PR class came up with the idea of doing a campuswide food drive for the Weld County Food Bank. They dubbed it Cans to Candelaria (the building where the journalism school is housed). Now in its fourth year, the food drive collected 4,000 pounds of food the first year, 8,000 pounds the second year and 30,000 pounds the third year.

This year, several journalism students are helping her launch a walk to benefit Zac’s Legacy, a Greeley foundation that helps cover living expenses for families of children who have cancer. Since being diagnosed with MS, Lee Anne has donated many hours of her time to the Multiple Sclerosis Society and was named 2006’s MS Champion for Northern Colorado for being an inspiration to others who have the disease.

Lee Anne became a member of Colorado Press Women in 2004 after her work won an award in CPW’s communications contest. When CPW hosted the National Federation of Press Women’s convention in 2006, she and a student-intern put together information packets to give to prospective contributors and solicited corporate donations. Lee Anne also convinced MSNBC columnist Jeannette Walls to speak at the convention – for a price that was one-fifth of what she usually charged. Lee Anne’s mother and her aunt Ginnie Gleason paid Walls’ fee and dedicated the journalist’s appearance to the memory of Helen Benedict, Lee Anne’s grandmother.

Currently, Lee Anne serves as co-membership chair of CPW, a critical job in this time of declining membership. Lee Anne also spoke at a recent CPW meeting at the University of Colorado School of Journalism about how state schools are preparing students for the new media of the 21st century. In addition, she’s a tireless proponent of Press Women and always tries to bring several students to CPW meetings.

“I love CPW with its range of experiences, the range in ages, the stories that I hear,” Lee Anne said. “Some of them remind me of my grandma.”

Lee Anne expects to continue participating in CPW, volunteering in her community and teaching young journalists as long as her health allows. Now in her sixth year at UNC, she recently was granted tenure and promoted to associate professor. She’s engrossed in the development of a Web-based ethics course with a colleague in the UNC philosophy department that’s aimed at public relations professionals.

“Our research shows that a lot of PR professionals aren’t getting this kind of training in college,” Lee Anne said.

That’s certainly not true of Lee Anne’s students. She frequently hears from students who have taken her ethics lessons to heart.

“When a student writes and says, ‘I quit my job because my boss wanted me to write about an advertiser’ or asks me for advice about a newsroom dilemma, that’s so rewarding,” Lee Anne said.