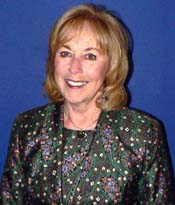 As a child, she loved to read about intrepid gal reporter “Brenda Starr” in the comic pages. In high school, she authored a weekly gossip column, “Jabbers by Judi.” As an adult, she’s covered events ranging from county commission meetings to a coup in Russia. With stellar professional credentials and an outstanding record of service to her community and Press Women, Judi Buehrer has been selected as Colorado Press Women’s 2008 Communicator of Achievement.

“We are fortunate — and the journalism profession is fortunate — to have Judi Buehrer,” says Gay Porter DeNileon, CPW president and former work colleague. “Judi is the epitome of what a reporter should be: tenacious, curious, accurate and empathetic. She’s also a strong supporter of Press Women and a delight to know.”

Few journalists have had such a varied career. Judi wore a traditional abaya to work in Saudi Arabia, interviewed Americans imprisoned in Thailand for drug-smuggling, covered “tree rustling” in Colorado and heard the name “Osama Bin Laden” in an embassy briefing long before most Americans did.

The “writing bug” bit Judi early. Judi Lee loved her first journalism course at Omaha North High School and joined the newspaper and the yearbook staffs. She majored in journalism at the University of Nebraska (and became a die-hard Cornhuskers fan in the process). She worked part-time for the daily Lincoln Journal during her senior year.

Recognizing her burgeoning talents, the editors wisely hired her after graduation in 1963. While covering county government and court cases, she wrote about the Nebraska Supreme Court’s decision to overturn the state’s century-old anti-miscegenation law.

“At the time, I don’t think I even knew what miscegenation meant!” Judi recalls, laughing.

From there, her career has taken her around the globe. Here are some highlights: After marrying Wayne Buehrer in December 1963, the couple moved to the Washington, D.C., area. Wayne worked for the U.S. Geological Survey. Judi worked for a daily newspaper until son David arrived in 1965, when she took up full-time motherhood.

Back in Colorado, son Chris was born in 1968. Judi began freelancing. Then came her first international adventure in 1970: USGS needed Wayne in Jeddah, Saudi Arabia. Although the Buehrers’ home in the Middle East had neither phone nor television, Judi freelanced, turning out a piece about Coloradans living in Saudi Arabia for The Denver Post. Daughter Heidi was born in Ethiopia, where the hospital was better.

Returning to Colorado with her family in 1972, Judi wrote for suburban papers in Jefferson County – and drove car pools, led Scout troops and volunteered for the PTA. In 1980, the family headed south to Albuquerque. There, Judi first joined Press Women and worked for weekly papers and later freelanced. Her most memorable piece for The Albuquerque Journal’s Sunday magazine was about a young girl mauled by a pitbull.

Judi continued to freelance when the family moved Denver in 1985; she wrote about the annual migration of sand hill cranes and Nebraska Cornhusker fans, among other topics. In 1987, she began a full-time job with the American Water Works Association, where she became expert correspondent in water issues ranging from treatment to drought.

Then 1991 brought another international move: Wayne, now a member of the U.S. diplomatic corps, was assigned to Moscow. Judi watched the tanks roll into Red Square when hard-line Communists attempted a coup and she wrote a story that The Denver Post ran on the front page. The coup failed, the Soviet Union collapsed and Judi began working at an English language weekly that became the daily Moscow Times.

After Russia, the Buehrers went in 1993 to Bangkok, Thailand, where Judi took a welcome break from daily deadlines. But writing in Thailand wasn’t all travel stories and features: Judi also wrote about Americans imprisoned for being “drug mules.”

The couple returned to Saudi Arabia in 1996. Judi doubted she’d work since women were so segregated in Saudi society, but she developed a successful freelance business. Still, she took care to wear conservative clothing and had Wayne drive her to interviews.

Returning to Colorado in 1999, Judi went back to AWWA in 2000. She retired in 2005, and cared for her mother, who suffered from Alzheimer’s, until her mother’s death last year. Since joining New Mexico Press Women in 1980, Judi has given freely of her time and enthusiasm. In NMPW, she served as secretary and treasurer. In CPW, Judi was ExPRESSions editor, secretary, second vice president and program chair. In 2005, she was elected CPW president and agreed to extend her two-year term by a third year when CPW was chosen to host the 2006 NFPW convention.

Looking back on her career, Judi says she is reminded of the old saying, “Things are seldom what they seem.”

“I’ve learned that when you’re going to report stories about people in another culture or a setting different from ours, it’s important to understand the political and historical context and as much about the culture as you can,” she says. For example, it’s easy to say Saudi women should be allowed to drive, but when you understand the culture, you realize this involves setting up an entire parallel system of driver’s education and traffic courts that are staffed only by women since the two sexes are strictly segregated.

Judi is pleased to be CPW’s Communicator of Achievement. “This is a huge honor that humbles me beyond words,” she says.