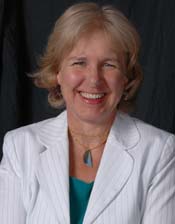 We all know what two molecules of hydrogen and one of oxygen make. For Colorado’s 2012 Communicator of Achievement Gay Porter DeNileon, H2O has made the main ingredient in her successful career.

Graduating from the University of Colorado Boulder with a bachelor’s degree in journalism, Gay landed a dream job that involved H2O in all its frozen glory: Thanks to an internship with the CU ski team, Gay was hired to cover World Cup and Olympic skiing for Ski Racing International, which she did with enthusiasm for several years.

Traveling from Lake Placid to Innsbruck to Sarajevo and points between, she met superstars such as Bob Beattie, Tamara McKinney, Phil Mahre and Ingemar Stenmark. With little coverage of the sport in the late 1970s and early 1980s, Gay freelanced widely and landed bylined articles in all the preeminent ski magazines.

During the most recent stage of her career, Gay’s work has involved H2O in its drinkable form. Since 1993, she has provided writing, editing, design and management services for numerous publications of the American Water Works Association, a Denver-based nonprofit dedicated to improving drinking water quality and supply.

“The snow melted and I got into water,” Gay jokes about her transition to AWWA.

But no one can accuse this experienced writer of being all wet. In between the frozen and liquid portions of her career, she has edited and written for a small-town newspaper, stayed at home with daughter Hilary (now 27), volunteered for school activities, trod the boards in community theater, joined two book clubs and recently was appointed to the Wheat Ridge Cultural Commission. She still loves to ski the black diamonds, hike and ride road and mountain bikes with Mike, her husband since 1996.

Born in Cincinnati, Ohio, Gay grew up in Holland, Michigan, with two sisters and a brother. As early as third grade, teachers told Gay she should be a writer. She started pursuing a creative writing degree at Michigan State University, but fearing she couldn’t earn a living in the fiction world, she turned to nonfiction. Her choice of CU was influence by her love of skiing.

Press Women is ever grateful that skiing and journalism lured Gay to Colorado.

While by some measures Gay is a relative newcomer to CPW – she joined briefly in the 1980s, then rejoined about 10 years ago – she has never shied from participation. She has served CPW as president, vice president and coordinator of the communications contest.

Ann Lockhart, CPW past president, summed up Gay this way: “I’m grateful for Gay’s friendship and long participation in Colorado Press Women, working on programs, the communications contest and serving as president while she was earning her master’s degree. She is a typical high achiever among CPW members.”