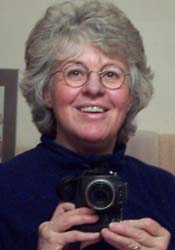 Name a major public health issue that made state or national headlines from the 1970s through the 1990s, and Colorado Press Women’s Communicator of Achievement likely was in the midst of the brouhaha.

During her 12 years as a spokeswoman for the Colorado Department of Public Health and Environment – and nearly 12 more years in other key leadership roles – Ann J. Lockhart helped shape state health authorities’ response to critical concerns. Whether it was the discovery of radioactive hot spots all over Denver, botulism tracked to a popular local restaurant, the recall of cyanide-laced Tylenol, public hysteria over HIV-AIDS, a 60 Minutes investigation of water contamination or the grisly discovery of a shipment of human heads, destined for a medical training facility in Denver, Ann responded to the many media inquiries.

Throughout her career, which also included teaching English and newspaper reporting, Ann maintained a reputation for honesty, responsiveness and clarity. Outside of work, she has volunteered for various community organizations, including tutoring recent refugees in English and American culture. And since 1973, she has been an enthusiastic member of Colorado Press Women, serving at the state and national levels. When CPW’s president unexpectedly resigned, Ann stepped in and will continue as president during the next year, as well as serving as NFPW parliamentarian. In short, Ann epitomizes the well-rounded person that NFPW recognizes with its Communicator of Achievement award.

“Ann is always looking forward, learning new technologies to improve her skills, thinking of innovative programs for CPW, and serving as a role model for communicators everywhere,” says Gay Porter DeNileon, CPW past president. “That’s why I was glad to nominate her for the Communicator of Achievement award.”

Lockhart was born in Elkader, Iowa, in 1945. Her father died of a heart attack when she was 3, and her mother two years later of cancer. The four Lockhart siblings were sent to live with different family members: Ann to her maternal grandmother in Garnavillo, her two brothers and one sister to other Iowa relatives. Although Ann saw her siblings with some regularity, it was often a solitary life.

She found solace in books. From the time her mother took toddler Ann to the library to check out Raggedy Ann and Andy, Ann loved reading and writing. She started her first newspaper in fifth grade and edited the student paper at Garnavillo High School. At the University of Iowa, she majored in English – because she could read a lot! After graduation, Ann went to Texas where her brother had moved, sold advertising briefly for the San Marcos Record weekly, and then began teaching high school English and journalism in Refugio, Texas, near Corpus Christi.

Ann loved the wide-open door that journalism offered. “When you’re a reporter and you’re curious about anything, you have a legitimate reason to dig into it,” she says.

As adviser to Refugio’s student paper, Ann encouraged curiosity in her staff as well. This didn’t sit well with the principal, who was particularly angry about a student editorial criticizing the perks that football players received. This was small-town Texas and football was king. Ann learned Freedom of the Press was not a school value: She was offered a job for the next year, but not tenure.

So, in June 1971, Ann packed up her first car – a Volkswagen Beetle that cost $1,999 – and headed to Denver, Colorado, a place that had always intrigued her. She shared an apartment with a fellow English major from the University of Iowa. After six months of pavement pounding, Ann landed a job with the Sentinel newspapers, a chain of suburban weeklies. She worked as a receptionist, and then moved to reporting and editing. In 1973, editor Mim Swartz got Ann to join CPW and enter the communications contest: “It’s good publicity for us,” Mim said.

Although Ann loved reporting and made lifelong friends at the Sentinel papers, she was less enthralled by night meetings, long hours and low pay. In 1975, she became editor of the University of Colorado Health Sciences Center’s newspaper. In 1978, she was recruited for the Colorado Department of Public Health and Environment’s public relations staff by its legendary director Rowene Danbom, who had been the first female bureau chief for the International News Service in the 1940s.

Danbom left the health department a month later, leaving Ann as the acting PR director with a mere 30 days of experience! She plunged in. “I just learned whatever I could from anybody I could find,” she recalls.

She found a wealth of stories and a staff of true public servants. “The people I worked with were so ethically focused,” Ann says. “When I helped them promote health and protect the environment, I felt I was doing a good thing.”

(Ann organized her own health promotion, too. She had had so much fun creating a recreational volleyball league at the health sciences center that she decided in 1982 to launch a summer league in the health department. Nearly 30 years later, the league is going strong; Ann played for at least 20 years.)

During Ann’s nearly 24 years with the health department, she took on a variety of challenges, including eight years as public relations director in the 1980s. Working with the department’s 14 divisions, Ann published a weekly employee newsletter; issued weekly news releases, answered daily media inquiries and organized several news conferences each year. She says she loved “the endlessly interesting stories” she was able to dig out of the department.

During her last nine years of full-time work there, she became the senior information specialist for the department’s Historical Public Exposures Studies on Rocky Flats, which had made plutonium triggers for bombs from 1952 to 1989, and sits just upwind of Denver. It was a hugely challenging communications jobs since many people were convinced that plant operators had long covered up Rocky Flats’ toxic releases and health effects.

“These were angry citizens. They didn’t know whom they could trust,” Ann recalls. She studied risk communication and emphasized open and frank discussions of what health officials knew about the plant’s problems and impacts on health. The approach won kudos from government officials and activists alike.

She retired early in 2002, but was called back to work part-time as risk communications coordinator for the Bioterrorism Preparedness Program in 2003; editor in the Chronic Disease Section in 2004; and historian in the Public Relations Department in 2005. She then launched Eagle Eye Editing, a freelance business specializing in technical writing and editing.

Since retirement, Ann jokes that she has “given up housecleaning” to accommodate her volunteer work. Even before retirement, she had been active in community and professional organizations. She chaired the steering committee that created the National Public Health Information Coalition, consisting of state health department PR directors, and served as its first president in 1990-1991. A longtime member of Toastmasters International, Ann was co-dean of the District 26 Toastmasters Leadership Institute, providing public speaking and leadership workshops twice yearly for nearly 130 clubs in three states in 1992-1993. She briefly edited the Colorado Mountain Club’s newsletter, joined two women’s investment clubs (now president of one), and campaigned for the Equal Rights Amendment.

Her most rewarding activity since retirement, however, has been volunteering with Colorado Refugee Services. In theory, she meets weekly with newcomers to teach them English and give them tips about American life. In reality, she has become their lifeline and friend, and gives far beyond her weekly allotment of time.

Ann helped Zainab, from Iraq, learn English for her citizenship test – and went with her when Zainab was too nervous to go alone. When she passed, Zainab invited Ann to her citizenship celebration in thanks. For a Burundi woman living with her two daughters and five grandchildren in a two-bedroom apartment, Ann mobilized friends to donate baby equipment and children’s clothing. When Bashar, a Sudanese refugee and former magazine publisher, couldn’t speak enough English to get the correct eyeglass prescription, Ann advised him to find a translator to take to the eye doctor’s office. She also treated Bashar, his wife and their three children to a concert of the Colorado Symphony – which Bashar declared “the best day of my life.”

Through her refugee tutoring, Ann has gotten a glimpse of how extremely difficult it is to be uprooted and dropped into a totally new culture and language. “I hope that if our country was ever in a civil war and we had to escape that someone would help me in the new country as I am helping these people,” she says.

As an offshoot of her health department career, Ann has been deeply involved since 2001 in a community effort to create a Rocky Flats Cold War Museum. She chaired the board in 2007 and 2008, and has helped gather and publish online transcripts of nearly 100 oral histories of former plant workers, government regulators and activists who campaigned to close the plant. She has received the museum’s Program Leadership Award and Years of Service Award, both in 2008.

Ann also has taught AARP Drivers Safety classes for seniors the past five years, about half a dozen times yearly.

Happily for Colorado Press Women and NFPW, they have always been recipients of Ann’s volunteer time and talents.

“If Colorado Press Women were a phrase in the dictionary, Ann Lockhart’s photo would be next to the definition! I cannot think of CPW or NFPW without picturing Ann and her incredible contributions to the organization. She is truly a press woman through and through,” says Marilyn Saltzman, CPW past president who co-chaired the NFPW Convention in Denver with Ann in 2006.

Ann’s contributions to CPW are stellar. She has served time and again organizing programs, handling publicity and in other appointed roles. She was president in 1978-1980 and is serving as president now. Some members believe the CPW might not have survived if Ann had not stepped in last fall when the former president abruptly resigned.

“Press Women members are like family to me,” Ann says. “I’ll call up someone if I need a connection or an answer. I’ve especially enjoyed the national conferences. It’s not just the sessions. I love the pre- and post-convention tours. We get to see places and meet people that few do because Press Women have connections.” Ann especially remembers the NFPW trip to the USSR in 1989, including a visit to the Soviet news agency, TASS; exploring an archeology dig in Barrow, Alaska, in 2000, and dining with Idaho sheepherders in a meadow in 2008.

“It’s the people and the experience. That’s why I keep going back,” Ann says.

Colorado Press Women is grateful for Ann’s nearly 40 years of contributions and is honored to nominate her for NFPW Communicator of Achievement in recognition of her many professional, community and Press Women accomplishments.