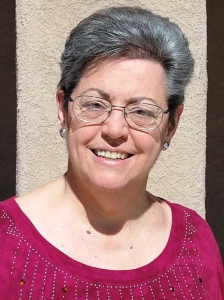 In work spanning more than 45 years, Ruth Anna has ardently defended the First Amendment and Colorado’s open records laws as a board member of the Colorado Freedom of Information Coalition, led both CPW and NFPW as president, founded Anna Public Relations Consultants – shepherding a wide range of clients – and volunteered for many community organizations. She speaks frankly, passionately and sincerely in all she does.

There is no one quite like Ruth,” says Sandy Nance, CPW president. “She has worked tirelessly for Press Women, for freedom of the press and for First Amendment rights, whether she’s serving the public interest via her county’s library system or helping put Colorado’s Freedom of Information Coalition on solid financial footing. She is highly regarded by those on the CFOIC board and by her clients. I value her counsel. She speaks her mind and defends her beliefs. We are proud to nominate her for national Communicator of Achievement.”

Ruth was born Jan. 29, 1949, in her parents’ car during a snowstorm en route to the hospital. She grew up on a farm, homesteaded by her grandparents, near the small town of Otis on Colorado’s Eastern Plains. The Heins lived in a 600-to-800-square-foot sod and wood house. Ruth drove tractors, delivered calves, and helped her father feed the cattle they raised as “insurance” to pay taxes since all too often their crops were destroyed by hail or root rot. Life was hard, but Ruth thrived. “I loved growing up on the farm,” she remembers.

While still in grade school in the early 1960s, Ruth decided to become a journalist. Like her parents, she was furious that Washington had begun blocking farmers’ direct participation in determining farm programs, with nary a peep from the public at large.

“I decided to go into broadcasting,” she recalls, “because I believed it was going to have the greatest impact on public opinion in the future.”

From then on, she was an activist. Her father had always urged Ruth to study issues and defend her beliefs. “Bad things happen when people remain silent,” he told her.

In high school, she rallied opposition to her principal’s efforts to ban books. During her senior year, she and her father successfully lobbied to change state laws to allow girls to play competitive sports. At the University of Colorado, she pressed for better staff training and facilities at the local hospital for rape victims.

Ruth was one of a few women in CU’s radio/TV track; her professors “helpfully” suggested she might pursue weathercasting!

At CU, Ruth met Larry Anna on a blind date and married him in December 1971. His studies and geology work moved the couple several times. After Ruth’s CU graduation in December 1972, she worked as the traffic manager for KTWO Radio in Casper, WY. “It was a foot in the door,” she says.

Six months later, the Annas were in Rapid City, SD. Ruth was hired as a receptionist and public service director at the top TV station, KOTA, but talked her way into also hosting a daily program dubbed “Two Bits with Ruth Anna” – a title Larry suggested since she got a whopping 25-cent-an-hour raise with the show.

Her guests ran the spectrum from politician George McGovern to activist Russell Means to sausage magnate Jimmy Dean. Ruth also danced with Lawrence Welk and “interviewed” animals. “It was a unique experience,” she says of “Two Bits.”

The Anna’s lived briefly in Denver, and then moved to Bismarck, ND. There, Ruth worked for Mary College, where she started its first alumni office, and then served as public information officer for the Attorney General.

Like journalism, public relations gave Ruth opportunities to effect change. “I could show clients how to tell their stories,” she says. “I shared simple little things that would convince people to hear them.” When the family returned to the Denver area in 1978, Ruth continued consulting after son Rudi was born in April 1979.

In the past 40 years, Ruth has guided the communications efforts of professional associations, scientific consulting companies, nonprofit agencies and government groups. She has planned fundraising campaigns and events, written speeches and promotional materials, presented workshops and seminars on communications, and created print and online publications, brochures, newsletters and articles.

She most values her work for the Developmental Disabilities Resource Council in Lakewood, CO. “I helped them get the message out that people with disabilities are people. I was really proud of that,” Ruth says. President George H.W. Bush chose the council as a Point of Light honoree.

“The best part of Press Women is the women I’ve met and worked with through the years. They are truly amazing,” Ruth says.
As a CPW member, Ruth helped plan the 1984 national convention in Vail and served on numerous committees. She was president of CPW from 1988-1991, and continued to serve periodically on the board until moving recently to western Colorado.

As NFPW’s leader, Ruth strove to ready the organization for the 21st century. She helped launch an NFPW website, revamped publications and focused on more realistic budgeting. Rather than being an organization that tried to be everything to everyone, NFPW turned under her leadership to serve professionals in smaller daily and weekly newspapers, smaller radio and TV stations and the public information arena.

Ruth’s extensive volunteer efforts are deeply entwined with her professional work and personal beliefs. For example, when CPW was not initially invited in 1987 to join the new Colorado Freedom of Information Council (now CFOI Coalition), Ruth approached the group on CPW’s behalf with then-CPW president Marilyn Saltzman’s enthusiastic backing. Ruth served as treasurer for the CFOIC for 21 years. Ruth also was NFPW trustee to the national First Amendment Congress for three years.

And when her children entered Jefferson County Public Schools, Ruth joined a “religion in school” policy committee. Initially leaning toward allowing religious groups on campus, she changed her mind after she heard a coach active in the Fellowship of Christian Athletes say he virtually forced his beliefs on students. Districts throughout the country have copied the committee’s subsequent religion policy.

Ruth’s extensive volunteer activities are detailed in the vital information section of this entry, but she considers most rewarding her time with STRIDE, which helps low-income families achieve self-sufficiency, and the Jefferson County Public Libraries where she was trustee, secretary, vice chair and chair. And no description of Ruth’s activities would be complete without mentioning her support, volunteer and paid, for the Republican Party!

In 2016, the Annas left Denver for Grand Junction on Colorado’s Western Slope to be closer to grandchildren. Ruth is now semi-retired.

Ruth underplays her many achievements. “I haven’t done anything magnificent,” she says. “I just plug away.”

Her clients, Press Women colleagues and fellow volunteers are grateful she has.

Tom Kelley, First Amendment lawyer, Denver: I met Ruth in the early ʼ90s when I became president of the Colorado Freedom of Information Coalition, for whom Ruth has been perennial treasurer. Ruth was always friendly and full of humor but also relentless and indefatigable in her work for the Coalition ranging from collecting unpaid dues to organizing and promoting our events, which were always great successes. Ruth’s dedication springs from her devotion to our mission of fighting for government transparency. Ruth is truly unique in the energy and focus she brings to the job of citizenship.

Linda Rockwell, friend/library volunteer: I served on the Jefferson County Library Board of Trustees with Ruth from 2008-2014. Although I knew her for many years before that, our service together cemented our friendship. I will leave it to others to enumerate her many accomplishments and years of community service. What I would like to point out during this particularly contentious political climate is that she was as active in the Republican Party as I have been in the Democratic Party. We often disagreed, but sought out and respected each other’s opinions. Both of us believe that good public policy can only be achieved through cooperation.

Jason Weston, Vice President, Wells Fargo Bank, Denver: I have known Ruth for nearly 15 years. When I was a young professional starting out in a new industry and in a new town, Ruth took me under her wing and taught me what it meant to be a community leader and to give selflessly for others. We first met on the board of Stride, then called Jefferson County Self Sufficiency Council, and our work together then extended to Metro Denver Partners, an organization Ruth introduced me to and for which I developed a great passion. For all the years I’ve known Ruth, I’ve been amazed at how she stays involved so deeply with so many worthwhile organizations and puts her heart and soul into everything she does.

Marilyn Saltzman, CPW past president: As a former NFPW and CPW president, Ruth is a strong, sincere and outspoken advocate for press women. Her unfaltering support for the First Amendment, open records and open meetings are legendary across Colorado. She served as the CPW representative on the Colorado Freedom of Information Council and has been a leader in ensuring press access to public records. Her enthusiasm, energy and commitment to our organization are infectious, and it’s impossible to say “no” when Ruth asks for support.

Bill Knott, retired director, Jefferson County Public Library: In our 15-year partnership, Ruth and I worked together on many communications issues, vital to the work of our public library. She actively sought to understand its complex issues, and always applied her personal principles of professional communications to her seat on the Board of Library Trustees. Ruth felt strongly that large public agencies, like the library, would best serve their constituency by assuring users that the library was theirs and was there to serve them. Libraries fortunate enough to have a Trustee like Ruth can be shown to have a lively and articulate dialogue over governance and management issues that are the hallmark of good communications.

Ramey Johnson, former Colorado legislator and Lakewood councilwoman: I have known Ruth for at least 25 years. I have always admired and respected Ruth for her people skills and ability to “message.” Communication, written and spoken, just comes naturally for Ruth. What makes Ruth dear to me is her unselfish willingness to share her gift. Ruth has volunteered thousands of hours to help others. She is relentless in getting tasks done in a very organized way. Ruth inspires others to achieve at a higher level and is right there with them, helping them all the way.