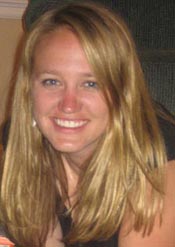 Colorado Press Women has awarded its 2007 college scholarship to Kara Lyons, a student at the University of Denver.

Kara was born and raised in Lakewood, where she lived with her parents and a brother and sister until heading to college. She began taking journalism classes in her freshman year at Green Mountain High School and hasn’t stopped since.

Kara is majoring in journalism and minoring in political science and business. She plans to graduate this November. She has worked for several small newspapers as an intern and is managing editor of the university newspaper.

Earlier this year Kara studied in France for a quarter and became fluent in French.

In high school she was an avid basketball player and a member of the student government. She also played tennis and soccer.

During her time at DU Kara has kept up her interest in sports, serving as president of the club basketball team for a year. She also enjoys playing tennis and golf. She participated in DU’s Programs Board, helping with event planning for the student body, and serves on the Student Media Board. Typical of many college students, Kara enjoys spending time with her friends, exercising and traveling.